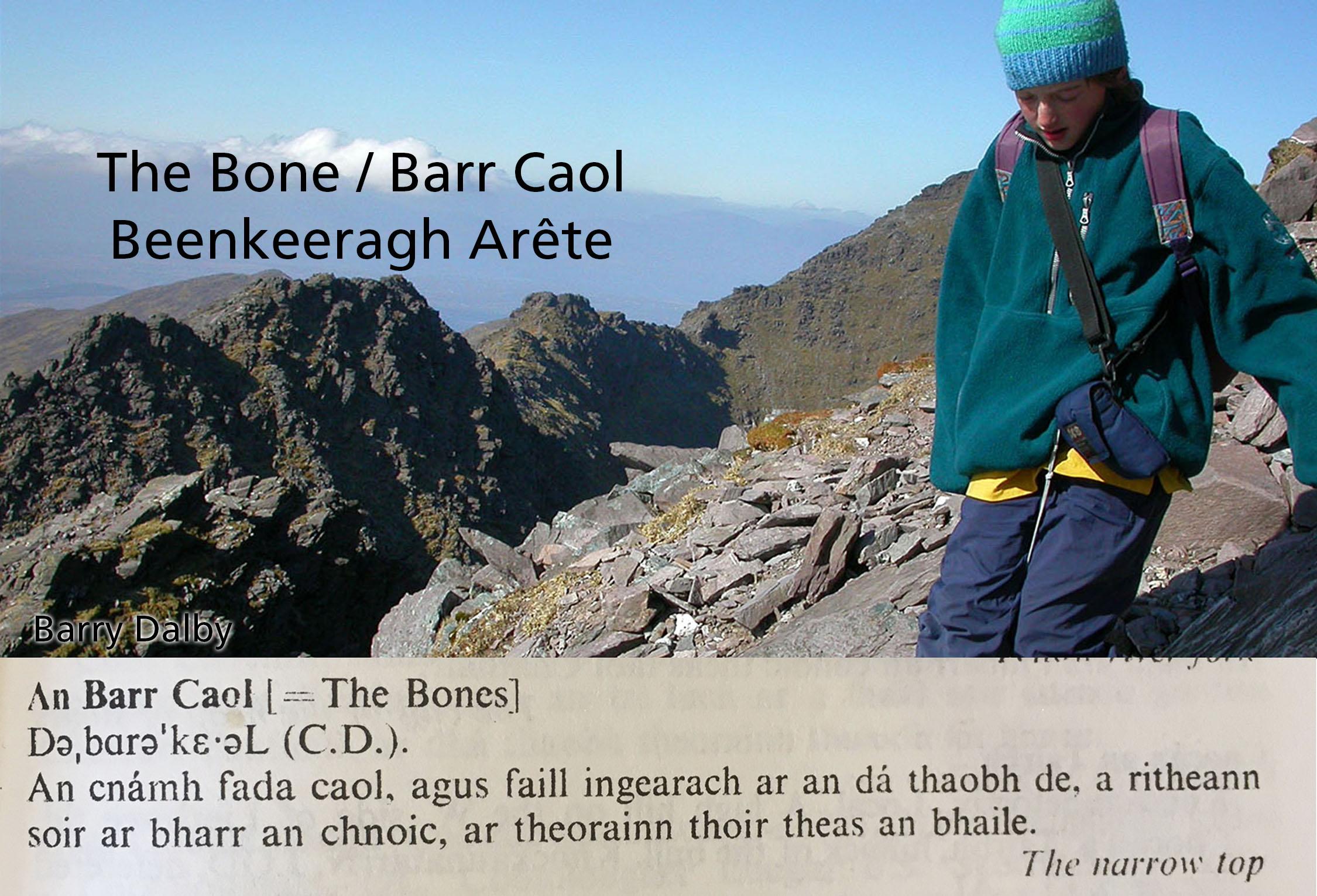 As per previous post, I’ve been reading carefully though Breandán Ó Cíobháin’s placename research for the Reeks area, undertaken about fifty years ago. A number of the names he lists have been added to maps published since 1990. In many cases the marked locations match his descriptions reasonably well but there are a number where his description points elsewhere. So either Breandán got it wrong in these cases or those previously reading his work have misinterpreted same. The purpose of these posts is to highlight these and hopefully they can be sorted out with help in due course from both local hill farmers and walkers/ climbers.

The first of these queries is relatively minor and lies in the Carrauntoohil group. Here current maps mark the name An Barr Caol roughly on the ridge leading east from Caher. The Barr Caol was supplied by just one informant from the Bridia valley and as you’ll see from the Vol I description, Breandán equates this name with The Bones or The Bone and describes it as a ‘long narrow bone’ i.e. arete on the SE boundary of Lyreboy townland. The Bone as a name was known by several informants and described by them as what walkers know as the Beenkeeragh Ridge or Arête that links Carrauntoohil to Beenkeeragh. The reason I suspect that it’s been plotted near Caher is an annotated aerial photograph that was included in Vol IV, so either Breandán made an error marking up the photo or it’s a correction that he didn’t list in the later volume. Unless someone knows different, I’d assume an error in marking the photo.

Also in this area we might query Eisc na bhFiach (gully of the raven) which Breandán describes as rising south and west from Loch Coimín Uachtair, under the Black Cliff to the south end of The Bone. This reads like what is now normally called Brother O’Shea’s Gully, after a man who fell here in 1968 I believe. This would have been around the time that Breandán was collecting names, so Eisc na bhFiach could be the older name. Contrary to this though is a popular Spórt Corrán Tuathail poster which lists Eisc na bhFiach as where Curved Gully lies a bit further east.