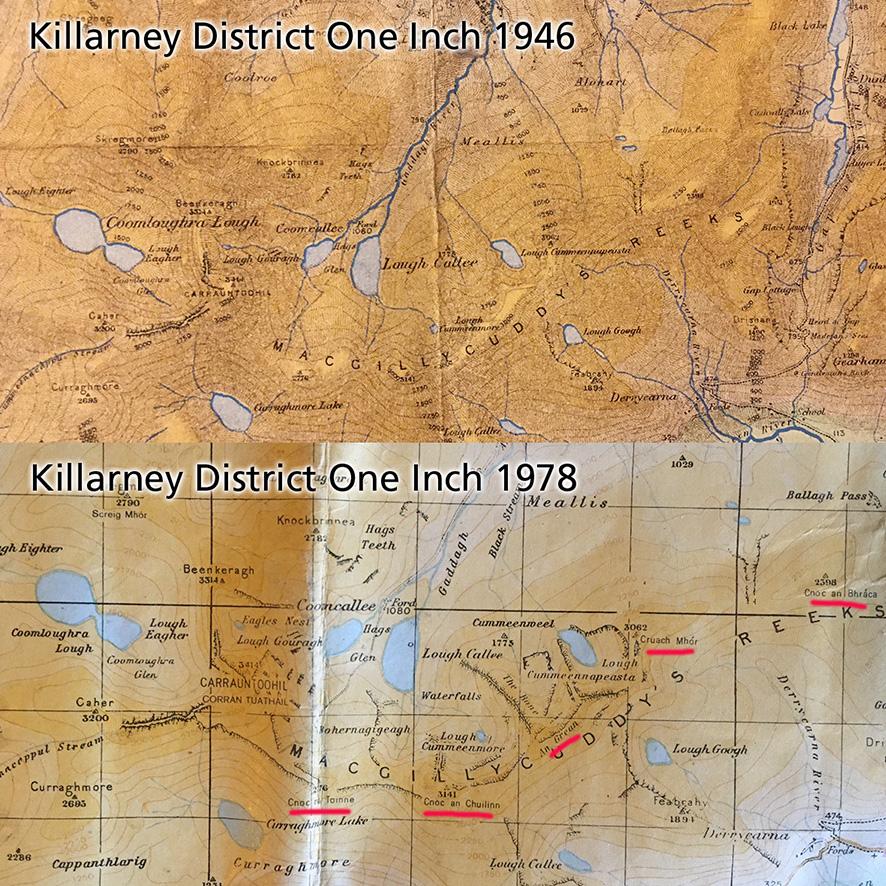 In terms of hill names, the historical record of mountain names in the Reeks is patchy. The Ordnance Survey Six Inch maps of the 1840s and the subsequent derived One Inch maps show the main names in the Carrauntoohil group: Carrauntoohil, Beenkeragh, Caher & Skregmore. However as can be seen from the Killarney One Inch map of 1946 here, there are no hill names recorded for the Eastern Reeks – that is between the Top of the Ladder and the Gap of Dunloe.

As described in the previous post, Breandán Ó Cíobháin researched many placenames in this district during the 1960s & 70s, including hill names. These were published in 1978 in Toponomia Hiberniae Vol I and as Breandán was a placenames officer with the OS, some of these hill names appeared on reprints of the Killarney One Inch map. Subsequently with the development of the 1:50,000 and 1:25,000 sheets, some additional names have appeared.

In addition to above, various walking guidebooks published from the 1970s used a variety of names for hills in the Eastern Reeks in particular. However, it can be readily seen that the currently published names are from Breandán’s research of c50 years ago.

In the course of preparing new maps of the area, I have been closely reading Breandán’s work, cross checking his descriptions against each other. Resulting from this it’s apparent that there are a number of issues with where some of the hill names have been applied to various maps since 1978. I’m going to go through these in subsequent posts in order to get feedback on them and of course, some verification may be possible from local hill farmers. These names have appeared on quite a number of maps now and people are familiar with them but on other hand, if they have been applied to the wrong locations, there’s no point in repeating error.