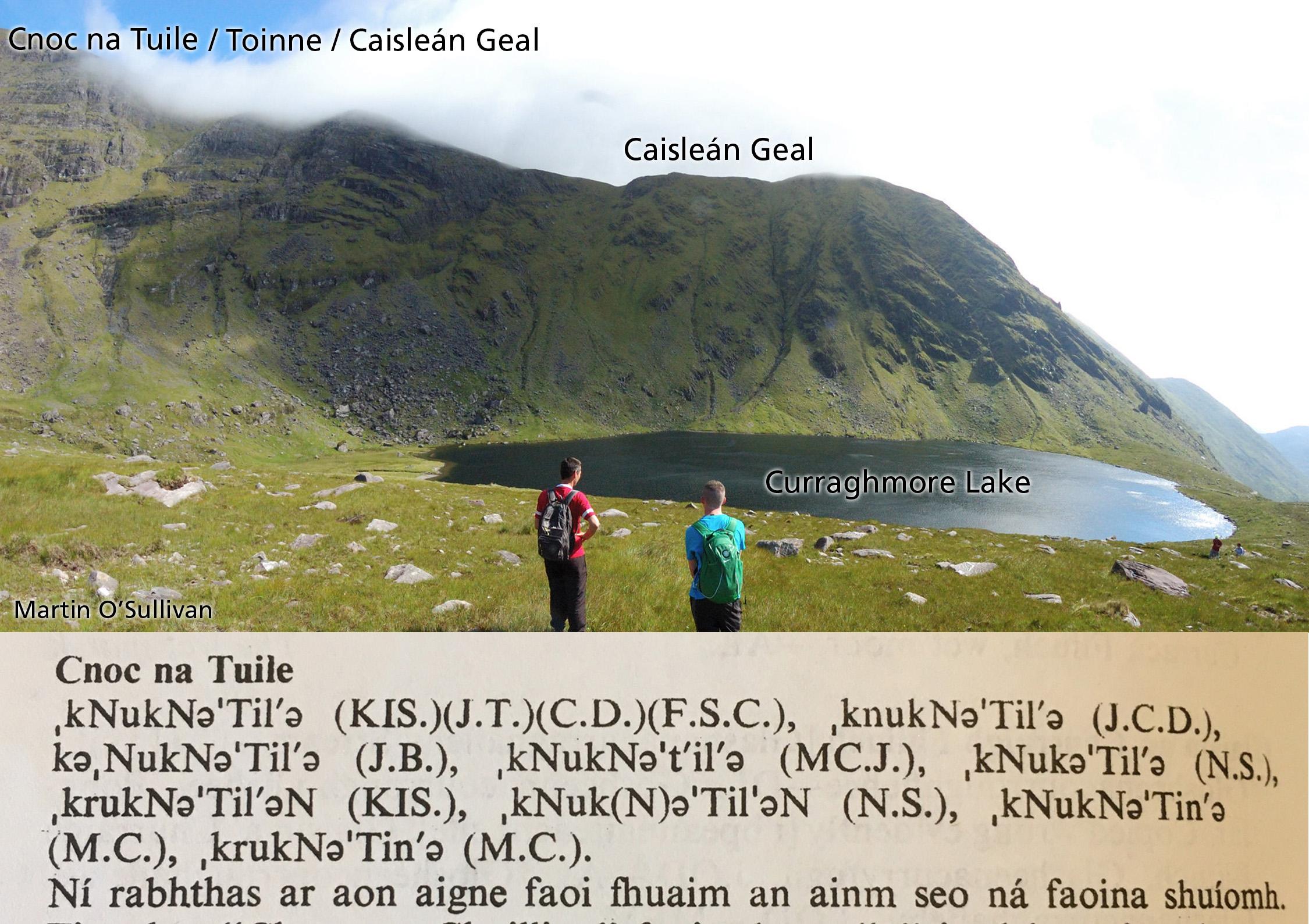 Turn left or east at the Top of the Ladder and the first hilltop has been labelled on maps and in guidebooks as Cnoc na Toinne or Cnoc Toinne since c 1978. The puzzle here is that Breandán clearly identifies this hill and states that the name is An Chaisleán Geal. He also separately lists a name Cnoc na Tuile/ Toinne but indicates that the form and location of this name are a bit uncertain. The phonetic versions of the name as shown above tend towards Knuk.na.Tila, only one person saying Knuk.na.Tina. The suggested meaning of Cnoc na Tuile is the ‘hill of torrents’, seemingly a reference to the many gullies running white after a bit of rain. This could apply to both the heavily gullied sides of Curraghmore and the Hags Glen side of this hill but in truth many other slopes also. In the text Breandán favours the name Caisleán Geal for the hill, speculating that Cnoc na Tuile/ Toinne could be towards Caher. For some reason though Cnoc na Toinne ended up on OS maps with no further explanation or correction.

The names Caisleán Geal & Cnoc na Tuile/ Toinne were given by informants on both the Hags Glen and Bridia/ Black Valley sides of the mountains. This indicates the likelihood of their being separate places and not just differing names from either side. My reading of it is that Caisleán Geal is the large jutting buttress of cliffs that runs from the SE side of Curraghmore Lake up towards the summit. This would be a Caisleán in hill terms and the word ‘geal’ meaning bright related to their south facing aspect and/or the sun glinting off water in the gullies that seam this buttress. The top of this buttress is up on the height heading for the summit and therefore might be the reason that Breandán lists this as the summit name.

Based on Breandán’s phonetic records, Cnoc na Tuile appears to be that and well known then but does it refer to this height? It could apply to the western slopes of Curraghmore Lake up towards Graighin. Maybe he concluded afterwards that Cnoc na Toinne was a different place and applied it instead of Caisleán Geal?