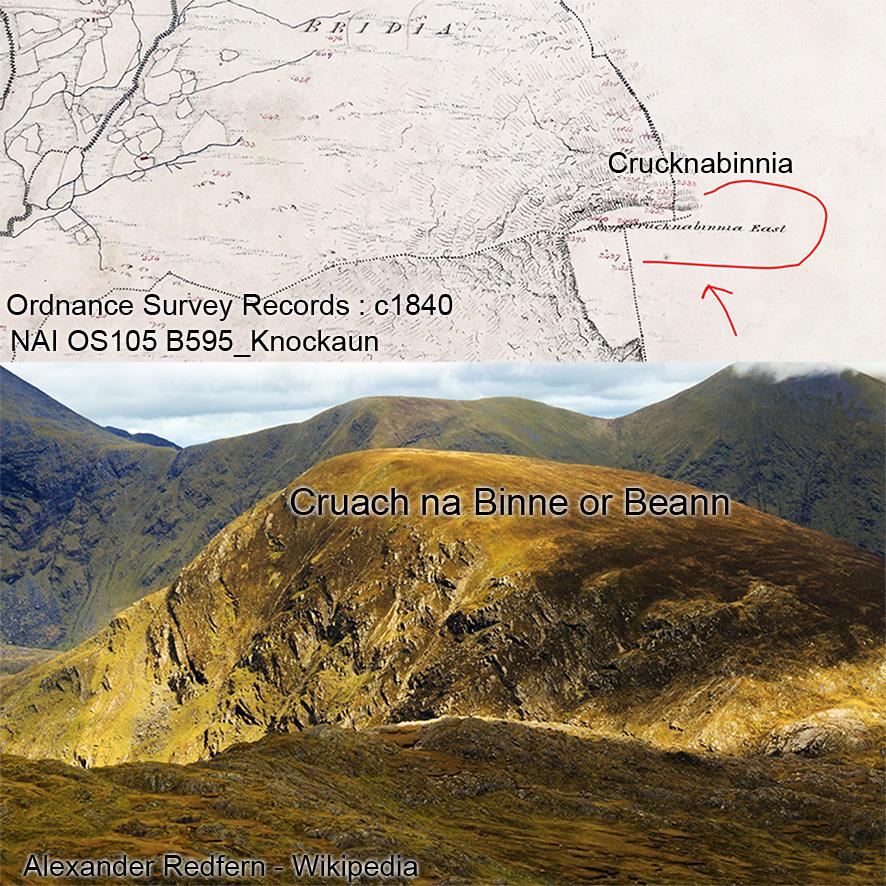 Our new Reeks map will be available later this week. As with our other map productions, I’ve made as thorough an investigation into placenames as practical. There is no doubt but that Covid has constrained anyone involved in collecting information from often older people in the past two years. This new mapping relies more on written records and previous research, most notably by Breandán Ó’Cíobháin, Áitainmneacha Chiarraí/ Kerry Place Names Survey, the Schools Collection, OS Survey Records and with special thanks to Con Moriarty for sharing his knowledge. I have no doubt but that with circumstances improving that the local placename record will be further enhanced in time.

Notwithstanding above, there are three name changes on this mapping that relate to some of the higher and better known hills and that I wish to draw attention to. These are:

1) Cruach na Binne or Beann for Broaghnabinnia. Breandán in his 1970s enquiries found the name Beann used locally for this high peak. The name Broaghnabinnia seems to have been introduced by the Ordnance Survey sometime in the early 20th century. There was a survey station named Boaghnabinnia located down in the Bridia valley and it appears they borrowed the name upwards. However the survey records of the original OS 1840s survey are clear – the summit was a significant station and is routinely labelled as Crucknabinny or Crucknabinnia etc where Cruach na Binne means the ’stack or reek of the peaks’

2) Cruach Mhór for the Big Gun. The Big Gun refers to a rock pinnacle much lower down. See blog post.  Cruach Mhór is I believe the name of this mighty rocky peak.

3) Cruach Bheag for Cruach Mhór. See blog post. This is the smaller cruach or stack with the grotto. It lies adjacent to Cruach Mhór and Breandán confirms that both these cruachs, stacks or reeks are plainly visible from the lowlands and are part of Na Cruacha Dubha.