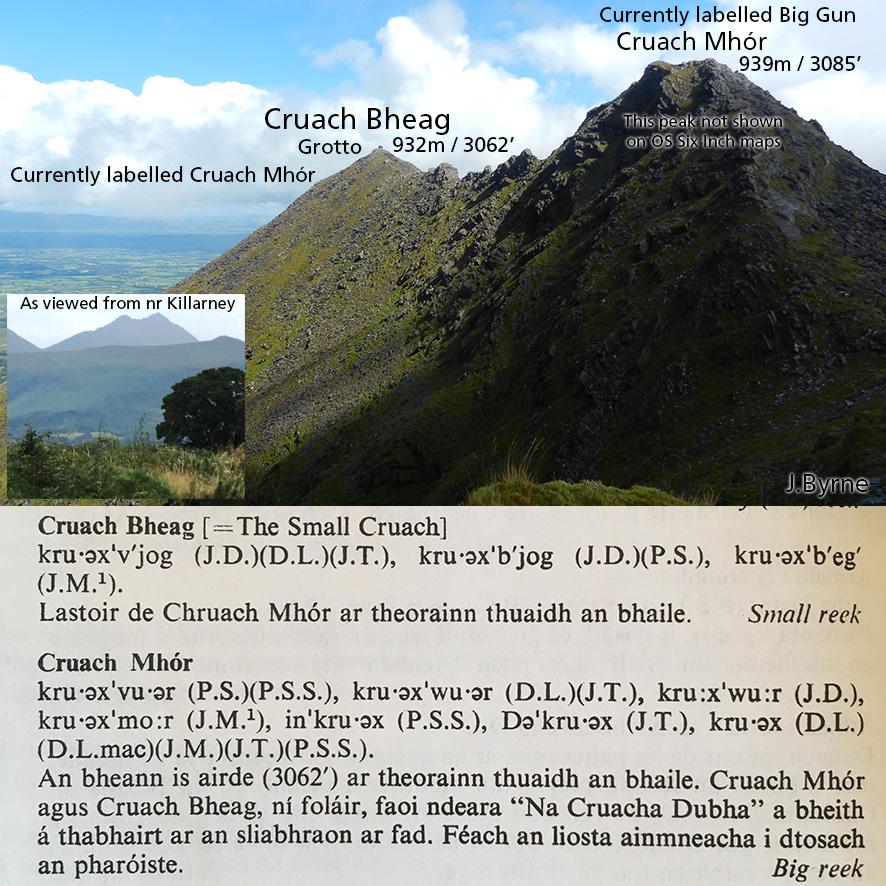 The name Cruach Mhór (big stack/peak) first appeared on maps abt 1978, located on the peak 932m where you’ll find the wee grotto. This is clearly based on Breandán Ó Cíobháin’s placename research published in Toponomia Hiberniae. See excerpt here where he states it’s the peak 3062 feet as marked on the Six Inch map that he had at his disposal. On the basis of these descriptions, the name Cruach Bheag (little stack/peak) was added to later maps and placed a little east of it on the spur.

However I strongly suspect that Breandán made a mistake here in where he identified Cruach Mhór on the Six Inch map. Perhaps understandable as the adjacent rocky peak currently labelled as the Big Gun and which is 939m or 3085 feet is completely missing from the Six Inch survey. This I believe is Cruach Mhór and the peak of 932m/ 3062’ where the grotto lies is in fact Cruach Bheag. Consider the following:

–       Breandán writes that Cruach Mhór is the highest peak on this part of the ridge. The peak 939m is only a small bit higher, however hillwalkers will know that it is a noticeably bulkier and rockier peak. Of the two Cruachs here, it is the more significant.

–       Breandán understands from his informants that these are two peaks as such, part of Na Cruacha Dubha, the old name for the MacGillycuddy Reeks. Where Cruach Bheag is currently labelled makes little sense, as it’s not an obvious peak. The two obvious adjacent cruachs whether viewed from close up or say from Killarney are the above stacks of 932m and 939m.

–       Com Cruaiche, the hollow of the peaks is also listed and crucially described as lying between Cruach Mhór & Cruach Bheag on the Black Valley side. The description for this Com Cruaiche can only place it on the east side of the peaks 932m & 939m and between them. This implies again that 939m is Cruach Mhór and peak 932m of the grotto is Cruach Bheag. There is no com or hollow between the current marked locations on the south side.

If there had been a spot height of c3085’ marked on the Ordnance Survey map, I’m pretty sure that Breandán would have marked Cruach Mhór there. He would have realised this was missing if he was looking at the map and ground at the same time as talking to the various informants. However sitting in a farmhouse kitchen at some distance from the site with a deficient map or working from recordings afterwards can easily lead to a mistake like above.