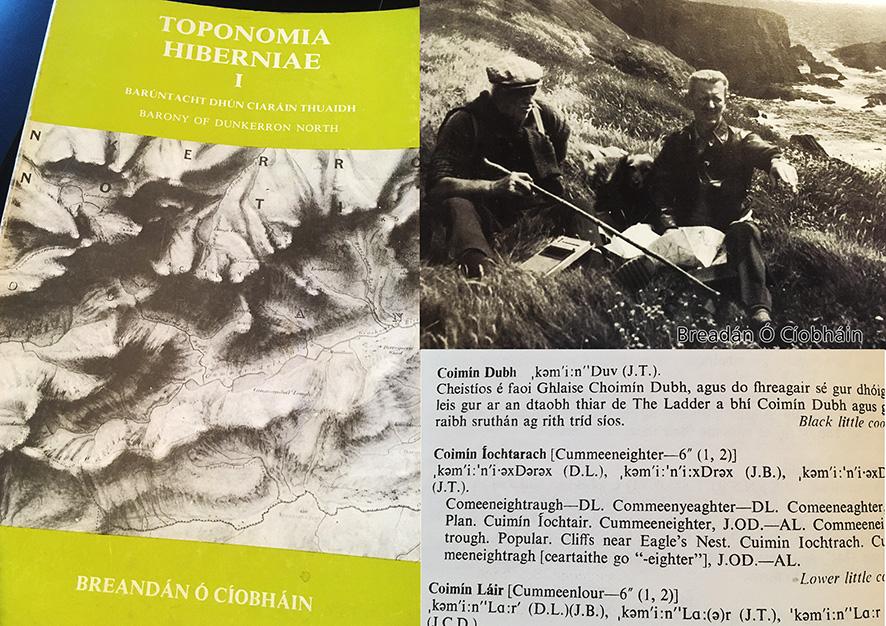 For Heritage Week that’s in it, I’d like to highlight the work of Breandán Ó Cíobháin who over a period of a dozen years documented many placenames of Iveragh in Co.Kerry. The work started around 1968 I think and extended to at least 1984 in the course of which Breandán talked to a couple of hundred local hill farmers and fishermen, documenting many of the local placenames known to them and their neighbours.

The results of this valuable and rewarding but time consuming work were published in a series of four volumes entitled Toponomia Hiberniae between 1978 and 1985. The title is a little incongruous perhaps given that the text of all four is predominantly ‘as Gaeilge’ rather than in Latin! The results of his research are carefully laid out with phonetic versions of each name and by which informant. Followed by a description of the feature and a rough location. Where forms or locations are uncertain, he noted this, so as not to mislead.

I would be inclined to be critical of the lack of effort by the State to document the rich heritage of local placenames since Independence. I was a little surprised then to see that  Breandán was a Placenames Officer with the Ordnance Survey, though I suspect this Kerry research was largely a labour of love on his part. It seems he may have had a plan to extend this research countrywide and there is mention of at least twenty volumes for Kerry? However the introduction to Vol IV sounds rather a bitter note as he bemoans lack of support for his work and that he is undermined by having to pay VAT on his sales etc. So as they say ‘plus ça change, plus c’est la même chose’ 😊

Notwithstanding this, the four published volumes are a great resource for anyone seeking information on the names of streams, glens, fields, rocks, hills, islands etc – townland by townland. I’ve spent a couple of weeks happily & carefully going through Vols 1 & IV to extract draft placenames for work in progress on a new Reeks map, of which more anon.