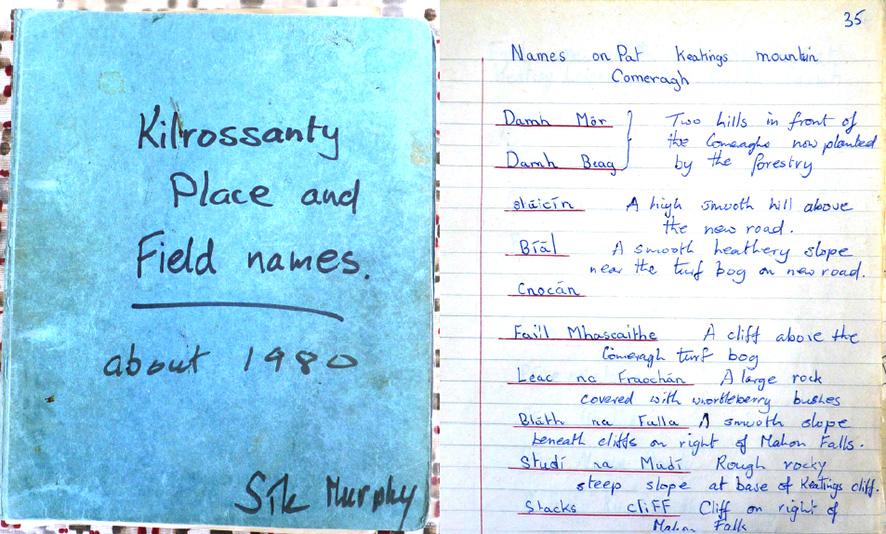 Users of EastWest Mapping maps often ask where we find the local placenames shown on same. The answer is never straightforward as there can be multiple sources with different versions and spellings etc. Key though is local information, as those that have been brought up in a district learn the local names from the older relatives and neighbours.

In an ideal world, we’d find knowledgeable informants in each valley or shoreline, who can give the true local pronunciation and point to/ give guidance as to where each name applies. Such people still live with us and their help & knowledge is of great value.

However there are also older sources that can help identify places and names that were known in recent decades but which informants have died since. One such source is this very interesting collection of local placenames made by primary school teacher Síle Murphy. She worked in Kilrossanty School on the eastern slopes of the Comeraghs and in the 1980s asked the children to help list & identify placenames on their own farms and neighbouring areas. These were compiled into the notebook shown which has about 80 pages of entries. Síle herself grew up locally and often visited grandparents who lived at Kilclooney on the way up to Comshinaun.

As common of the time, there are no maps with the various lists, so for example a list of 10 field names on a certain farm might be recorded but exactly which field is which is not often evident. However other entries do give descriptive guidance as in this list of names on Pat Keatings mountain – roughly Com Mahon. So for example ‘Studí na Mudí’ written as pronounced is listed as a rough rocky steep slope at base of Keatings Cliff and so on.

Armed with this information, I was then able to check and follow up where possible with living informants and between both and other sources, this would make up the choice of names shown on this south eastern side of the Comeraghs on our map. This is time consuming work but always interesting and the whole process can be likened to mostly solving a puzzle or bringing an image into focus.

But of course the key thing here is the foresight by people like Síle Murphy in gathering up local history over the years and in her generosity of sharing it, so that future generations can know & use these names.

Cailleach of the Hags Glen