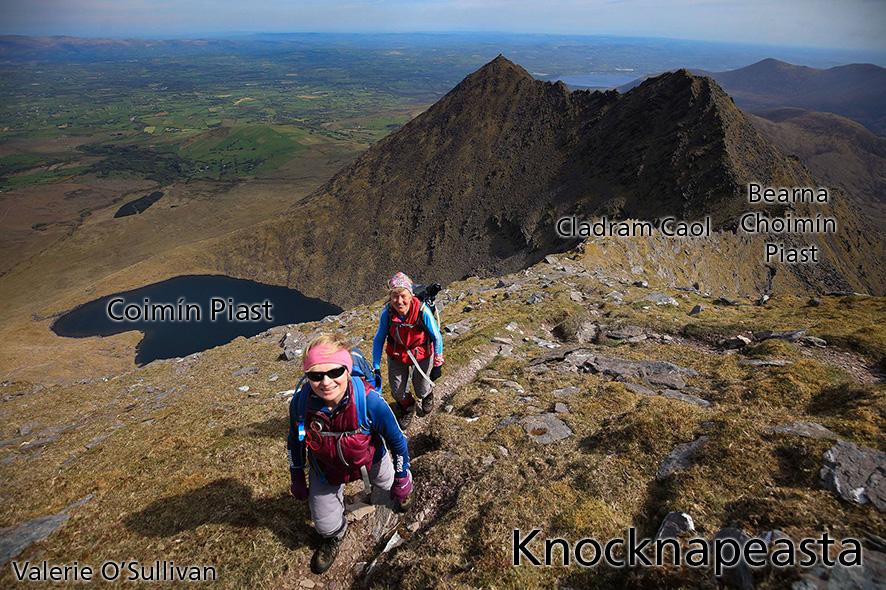 The highest point on the Eastern Reeks at 988 metres or 3191 feet (on old maps) is labelled as Knocknapeasta or Cnoc na Péiste since the 1990s. However it is one hill that Breandán above does not list a name for. The only time he refers to this hill it’s as ‘beann eile, 3191’ ar airde’ – that is ‘other peak, 3191’ high’. I’ve known the name Knocknapeasta as in the Knocknapeasta Ridge since the 1970s but I think it’s maybe a ‘hillwalkers name’. Don’t get me wrong, the general theme is well known locally and Breandán lists various forms he heard: Coimín Piast, Coimín Piast River, Sileadh Coimín Piast, Glaisín Coimín Piast, Loch Coimín Piast, Béal Coimín Piast & Bearna Choimín Piast but not once does he list Cnoc na Péiste. From which I conclude that the name was not in common local use for the height which is not surprising as hill farmers are/ were more concerned with slopes rather than tops.

Names near the height that Breandán recorded are ‘Barr na bhFaillteacha’ and ‘An Cladram Caol’, the former being the ‘top of the cliffs’ i.e. the top of the cliffs at the back of Coimín Piast / Cummeenapeasta. Whilst ‘Cladram Caol’ he describes as the narrow rocky arête leading down eastwards from the summit – but note that he only had one source for this name and at that, a local man living in Dublin who recalled his uncle using this name many years before.

So in the absence of local information fifty years ago, Knocknapeasta seems like a reasonable name to have on this height, given it’s long standing use by hillwalkers anyway.