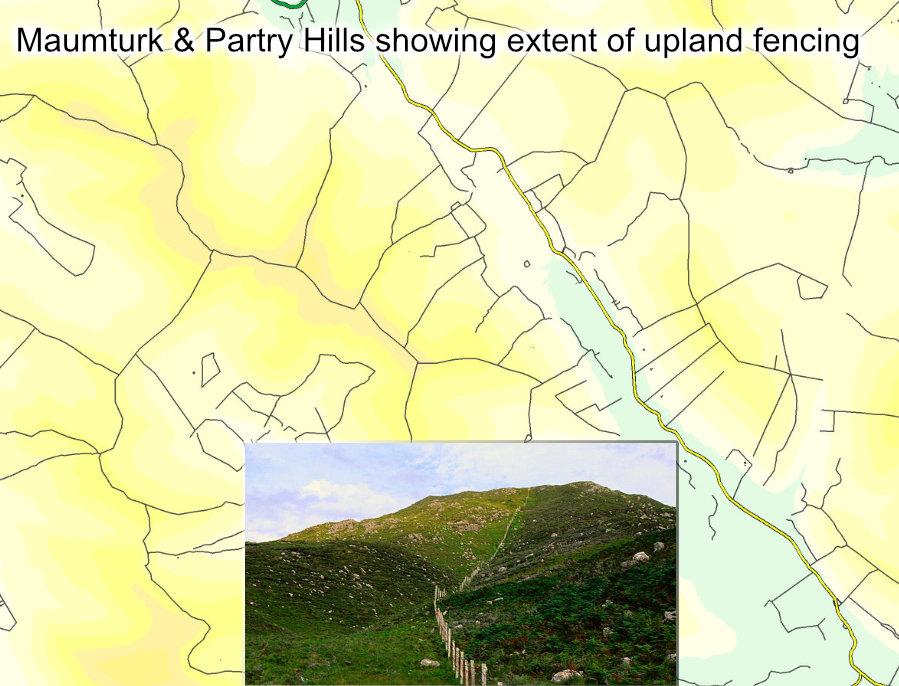 Whilst compiling detail for our Connemara Mountains, I was often struck by the dense network of modern upland fencing. Where older walls and fences bend to the shape of the land, these new fences often run straight as a die across rough and broken ground. I classify certain types of boundary when plotting and I see that across the full area, I have plotted 685 kilometres of such boundary. Since some of this would be ‘head ditch’ fencing, dividing enclosed land from rough mountain, we can discount a portion. A conservative estimate would be that there is c300 kilometres of mountain fencing in this region, most notably in the Maumturk and Partry hills as shown in the sample image here.

These fences sometimes run parallel to streams, other times they march along the ridges and spurs. I’ve plotted such upland detail in Wicklow, Mayo and the Southeast and whilst there is certainly some mountain fencing in these places, it’s far less extensive and tending towards decay.

It must have been hugely expensive to erect a lot of this fencing in the west, you’d want to be flying materials in by helicopter in places. Nor is it strictly necessary from a stock control point of view for hill farmers as whilst some sheep will stray, most have a flock sense of their grazing areas and stick to them.

It would appear that at least in part, the EU and the state are responsible for this state of affairs. This based on an interpretation that the Single Farm Payment scheme required lands to be adequately fenced. Since hill farmers don’t earn huge amounts, the state was/is then required to step in and fund this mountain fencing. What’s unclear is why this provision is applied in some regions and not others. Perhaps the fencing schemes also provide a source of employment, similar to the forest planting schemes of times not long past? There is no question but that some blanket bogs were totally unsuitable for planting and you’d wonder about the wisdom of some of the fencing too.