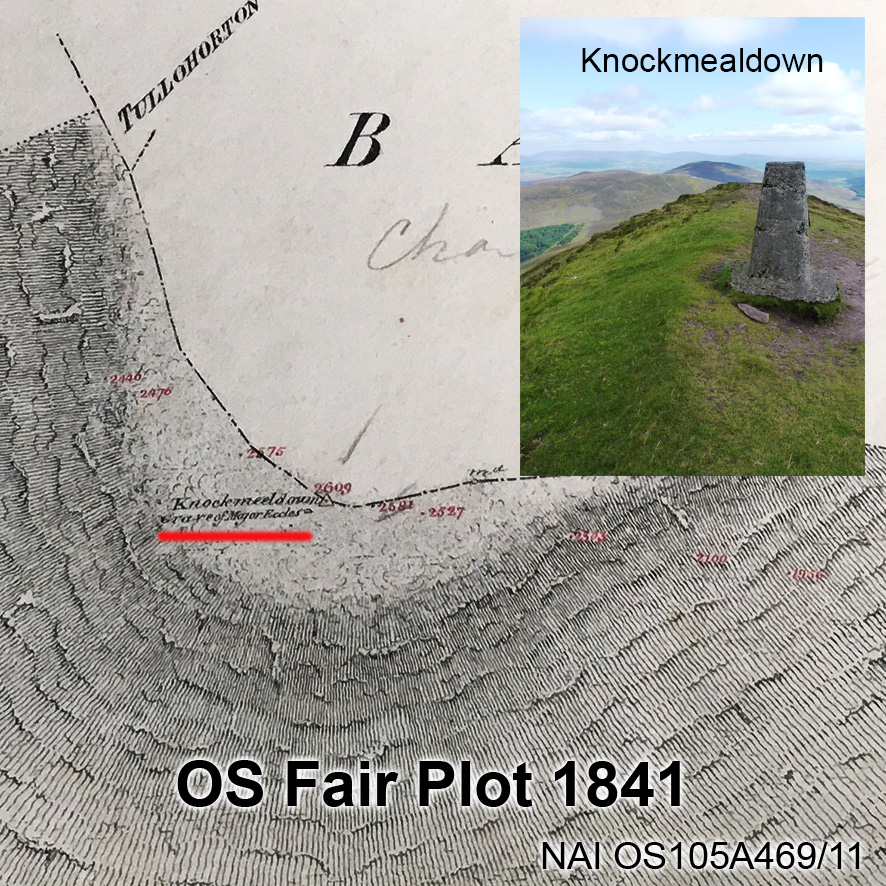 On the summit of Knockmealdown is said to be buried Henry Eeles (1702-81), his dog and his gun. The position of the grave of Major Eeeles or Eccles is marked a little west and south of the summit trig pillar on the draft OS Six Inch map surveyed in 1841. Since this was an important triangulation point and the grave is marked close by, one could assume that it’s shown fairly accurately as the grave would only have been a few decades old then. It’s plotted as thus on our modern Knockmealdown 1:25,000 scale map. This site is corroborated by a local hill farmer who says he was shown the mound of the grave by his grand uncle when he was young but that ‘quads’ or maybe walkers have flattened it now. There is an area to the east of the summit ringed with stones but this is modern.

But who was this Henry Eeles? This is where it gets murkier: Hall’s Tour of Ireland dated 1841 writes of Major Eeles buried on a height in the Knockmealdowns. Canon Power concurs and describes him being buried with dog & gun. An account by Croker has him as Major Eeles, an eccentric who lived in Youghal and who experimented with electricity and lightning and is buried with horse & gun on the mountain. How you’d bury a horse there I don’t know.  The Schools Collection for Ballyporeen gives an account of a Major Neill, a British army captain killed in the 1798 rising at Waterford and buried on the highest top in the range. Since Eeles is said to have died 1781, maybe this story is mixed up but Neill and Eeles are not dissimilar names.

Whoever Henry Eeles was, he certainly chose a fine spot for a final resting place and one that gets plenty of visitors. And may he & his dog/ horse rest in peace for many years to come.