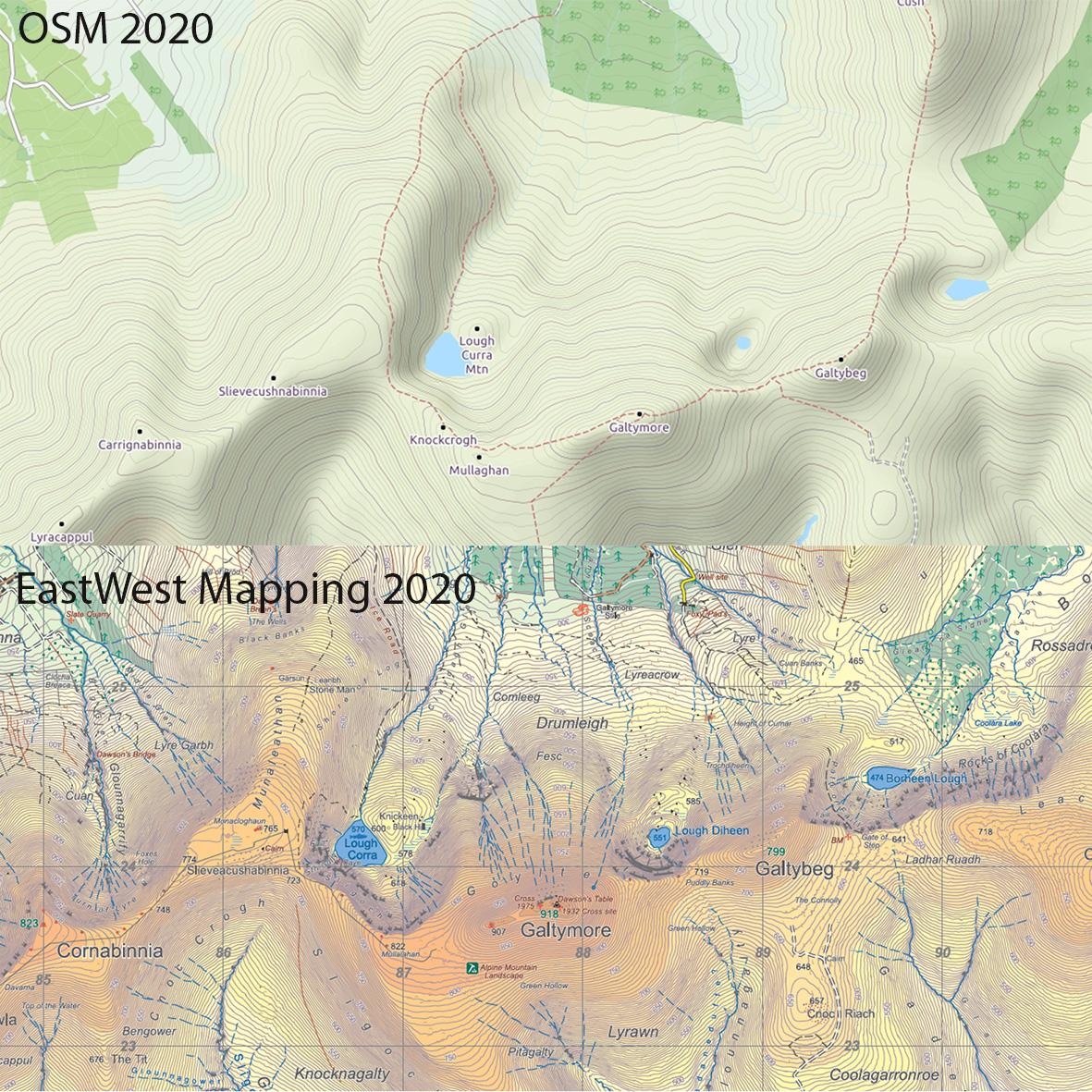 Anyone around in the late 1970s will recall the hit song ‘Video Killed the Radio Star’ by the Buggles. Video hasn’t quite killed radio yet, but I’ve no doubt that radio is not listened to, in quite the same intense way as before. The question on my mind today is will ‘Digital Mapping’ kill ‘Paper Mapping’.

I’m quite often asked if I have plans to make detailed maps of Donegal, Sligo, Wexford, Slieve Blooms, Clare, Cork, Kerry – you name it. My answer is invariably ‘maybe… or maybe not’. There’s a substantial investment both in cash but more particularly time to develop good maps and if these can be met, the issue then is, will the map have enough legs, enough sales to pay some or all of this back? In our current EastWest Mapping catalogue, we have both – sheets that will cover their costs and ones where frankly I’ll be six feet down or a pile of ashes before they get there!

Looming over this are changing technology and habits. There is no doubt that a map printed on a large paper sheet is currently the easiest way to get an overview of an area and of course requires no batteries when in your hands outdoors. However future technologies in screens and power supplies may well offer equally good solutions.

More insidious is the growth of online mapping platforms like Google Maps/ Google Earth and Open Street Map. These are free services (currently anyway) to the public but make no mistake, all have commercial interests behind them. Google Maps is absolutely integral now to the Google business model – it’s the spatial glue that binds many services together and allows for tailoring of output. It’s no co-incidence that when you search for certain services or products, that you’re directed to those ‘local’ to you rather than the equivalent elsewhere. Look at the massive free content on Google Maps/ Earth/ Streetview etc – there’s huge investment involved with a business model behind that based on solid profits.

The Open Street Map (OSM) project is often modelled as community mapping – a sort of Wikipedia for map detail. Volunteers submit and edit detail and insofar as that goes OSM is fine. But behind OSM are services like MapBox where this same data is sold for commercial mapping applications. Apart from user input, OSM data is also collected anonymously when users allow tracking on their devices to be fed back to OSM to ‘improve the map’. So for example patterns can be identified in GPS tracks that allow for new road networks to be identified and mapped. This data is then available for ‘mash up’ maps used in various mapping applications.

Google Maps and Open Street Map currently serve the standard road network of Ireland pretty well. It’s reasonable to suppose that they will improve their level of detail in off road areas as time goes on. Through a combination of user input and the likes of more detailed contouring etc. I can’t see them ever equalling the sort of careful compilation of say an EastWest Mapping map – but and this is crucial, they don’t have to. They only have to be ‘good enough’ to be usable, particularly if they are ‘free’ services. At which point these online mapping services will most definitely kill off any sort of independent map production. The loser will be the public of course, who while enjoying free or cheap digital mapping, will have to be happy with maps that are relatively mediocre and dumbed down.