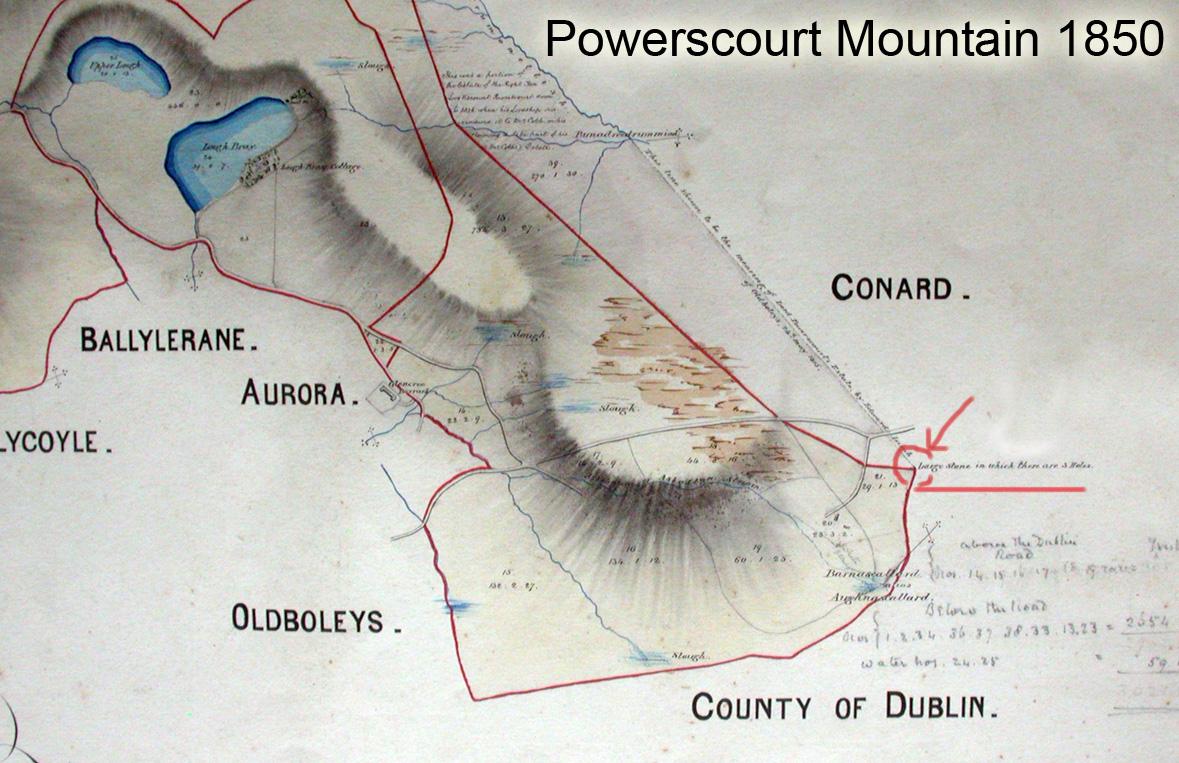 Many people who drive along the Military Road across the Featherbed Bog in the Dublin Mountains would be unaware of this simple but remarkable stone. It’s only a couple of hundred metres through the heather and across the bog and those who take this short tramp will find a large rounded granite rock with three hole like depressions in it, a bullaun stone. Here you may ponder on the countless people down through the centuries who have stood at this spot and gaze across a landscape which whilst modified by man must be much the same as it always was.

The site has some ancient significance as it marks a sharp turn in the administrative boundaries that make up our land. This bullaun stone lies smack on the boundary of  townland, parish, barony and county (Dublin & Wicklow). It’s even described on this 1850 map of part of the Powerscourt Estate as a feature, a ‘Large stone in which there are 3 holes’.

Now bullaun stones like this are traditionally associated with old ecclesiastical sites, though their original function has been much debated. The most obvious practical use would have been for grinding using a smaller rounded stone like a mortar & pestle. But perhaps the holes were also used to contain liquids or materials associated with ceremony. Either way, this is a strange location for a bullaun stone as it would appear unlikely that the windswept Featherbeds had a church associated with it. A possible explanation is that it was a boundary marker of the ‘bishop land’ of the Archbishop of Dublin, whose church lands gave definition in these parts to the early shaping of County Dublin in the 13th century. But even at that it’s quite possible that said Archbishopric adopted the boundary from some earlier understanding of territory. Clearly this was an important spot for some good reason in our distant past.

Lugnaquilla & Glendalough temporarily Out of Print