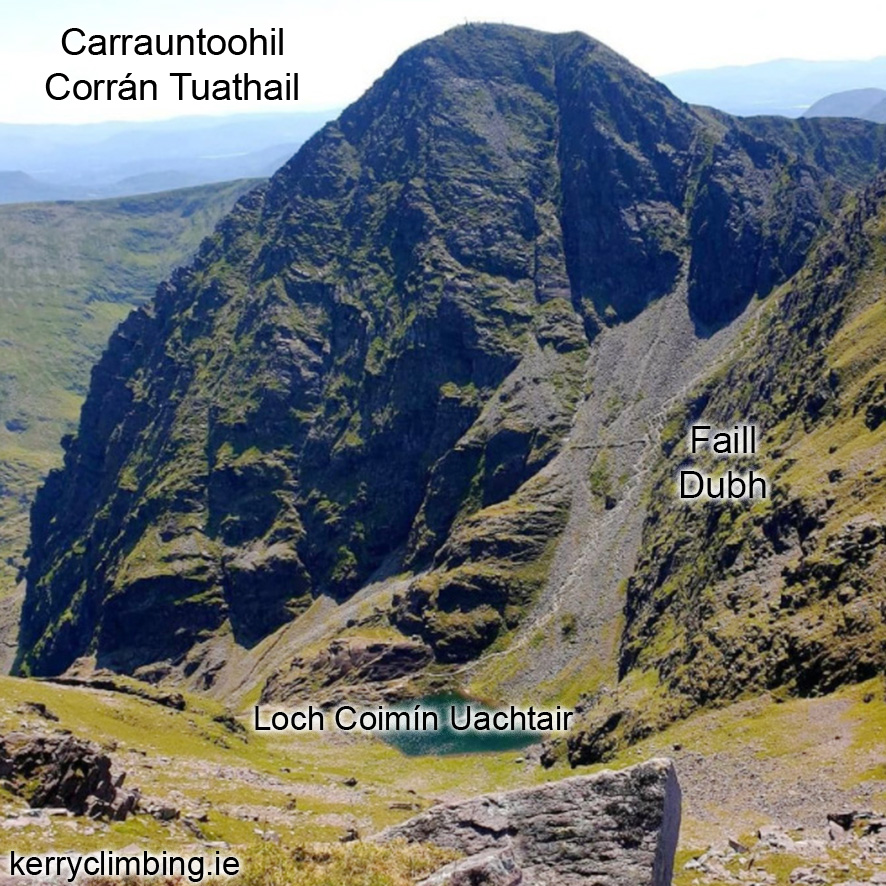 Pictured here we see the mighty north slopes of Carrauntoohil, Corrán Tuathail. The pretty lake Loch Coimín Uachtair occupies a basin where a small glacier once emanated from. Coimín Uachtair means the upper little coum and there are two other basins lying below. First is Coimín Láir, the middle little coum and below this lies Coimín Íochtair – the low little coum. Below this again is Com Caillí, the Hags Glen.

A large scree slope is visible on the far flank and the zig zaggy path climbs up from Coimín Íochtair & Coimín Láir below, to continue up the scree slope and on up a large gully to reach the crest. This popular route of ascent has been called Brother O’Shea’s Gully since 1969 after Michael Laurence O’Shea was found deceased hereabouts. Prior to that it appears to have been called Collins Gully but it’s older local name appears to be Eisc na bhFiach – the channel of the raven. The two other obvious gullies are Central Gully and Curved Gully, harder & less frequented propositions than Br.O’Shea’s. A large dirty cliff flanks Br.O’Shea’s Gully on it’s right hand side as you ascend from Coimín Uachtair and this is the Faill Dubh – the dark cliff.

All this and much more on our detailed 1:20,000 map of The Reeks published in 2022, available online from www.eastwestmapping.ie or from Cronins Yard.