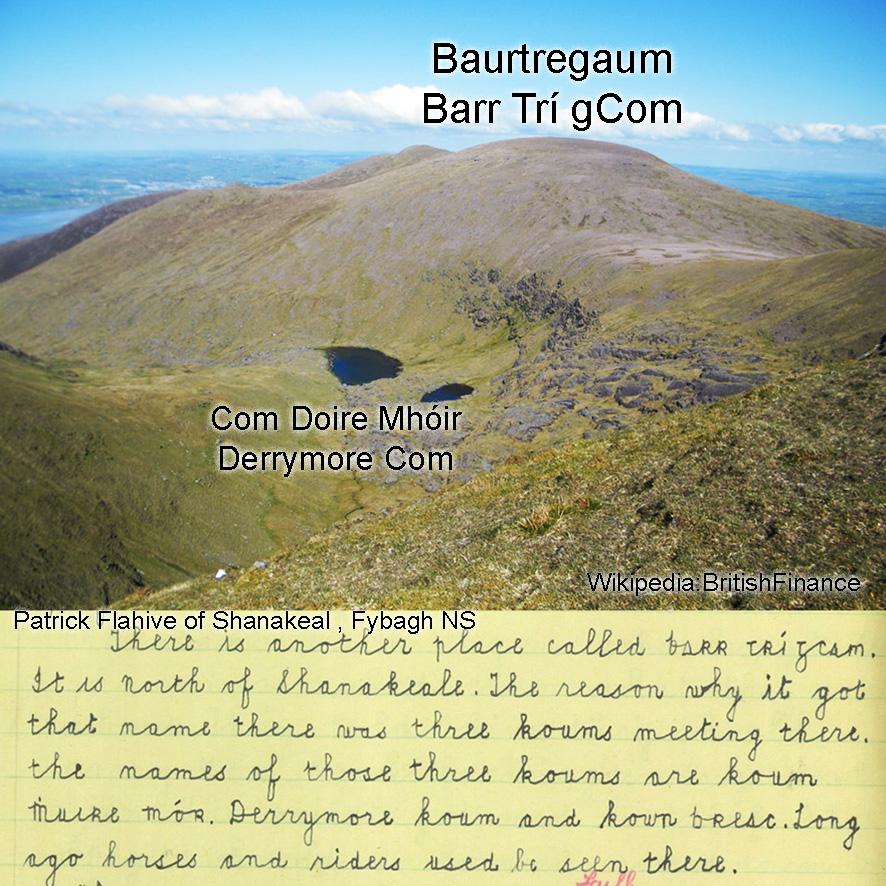 I’ve been reading through the Schools Collection for the greater Dingle peninsula to see what placenames were recorded there in the 1930s. As usual with this collection, the amount of placename & related information varies greatly from school to school, depending on the teacher and how they approached the task. Some schools recorded large numbers of field & coastal names, though frustratingly location advice is often omitted. However I did find an answer of sorts to one question that was puzzling me.

This concerns Baurtregaum or Barr Trí gCom, the summit of the three coms (hollows). Information elsewhere indicated the names of Com Doire Mhóir and Com Breac as the western and eastern of the three coms respectively. But what of the smaller and lakeless com on the north side, lying between above?

An answer lies in the account of Patrick Flahive of Shanakeal on the south side and collected by Mary his daughter who attended Fybagh National School. You can read it here: ‘The names of those three koums are Koum Mhuire Mór, Derrymore Koum and Koum Breac.’ Derrymore Com or Com Doire Mhóir is named for the townland of Derrymore and contains a few small corrie lakes. Com Breac is the upper part of Gleann Breac – breac meaning dappled or mottled in colour.

Com Mhuire Mór as given by Patrick is a bit of a mystery as to meaning. As spelt ‘Muire’ is usually associated in placenames with Our Lady and has a religious sense. That seems most unlikely here and I think can be discounted. Perhaps ‘muire’ as written down is a form of ‘múr’ as in a wall or rampart. Certainly the back of this middle com rises very steeply to the summit and Com Mhuire Mór could be likened to the ‘com of the great wall’. Problem is that whilst hillwalkers and mountaineers will refer to like places as ‘walls’, it’s not a term found in Irish upland placenames. Maybe a reader here can think of an example elsewhere and/or suggest a meaning.