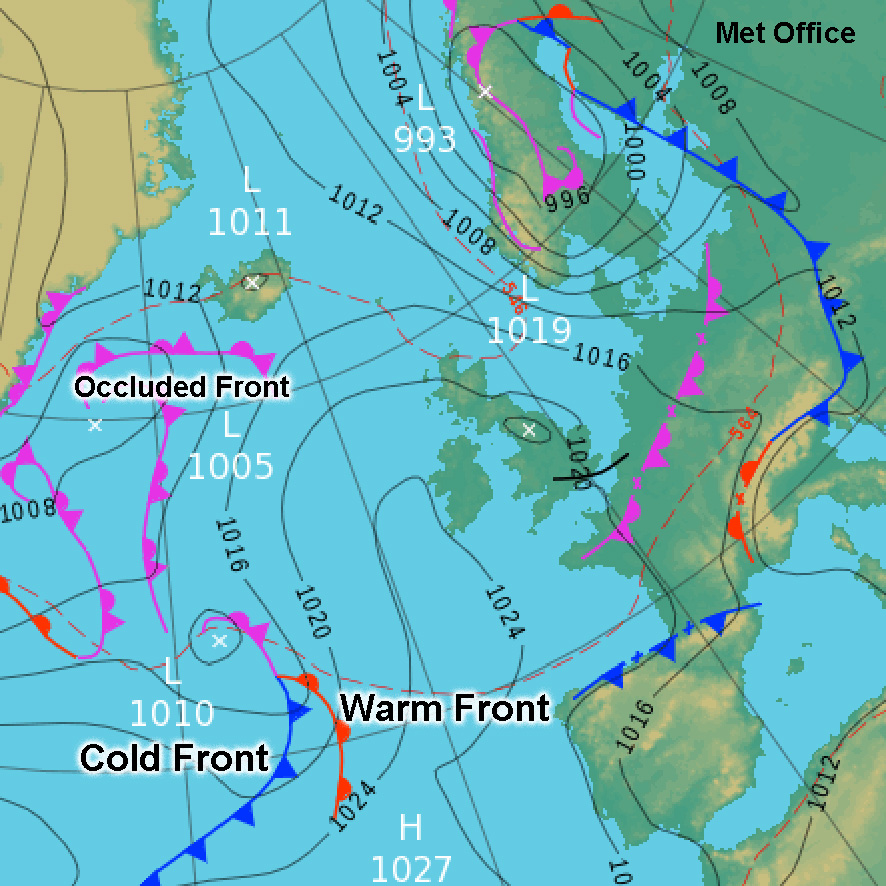 Have you ever been out on the hills in fairly mild wet, misty conditions to then experience a heavy belt of rain followed shortly by a sudden clearance to clearer, cooler weather? You’ve just witnessed & felt the passage of a cold front.

Weather fronts are of interest to those who spend time outdoors as they can inform your decisions for the day. Weather systems as explained previously generally move across Ireland from the Atlantic in the west and leave us to the east heading across the Irish Sea. These systems are made up of cooler and warmer air mixing as they go along. When the change in air mass passes us, we call this a front. There are three types of weather front: warm, cold & occluded.

Typically warm & cold fronts are associated with cyclones or depressions that cross us, often one after the other in winter. The warm front comes first – so as we are out on the hills, the clouds thicken and lower. The warm air approaching us is wetter as it holds more water vapour, so it rises above the cooler air around us and as it does: rain forms, falls and wets us. The warm front passes us in conditions of often low hill mist and rain, followed by a gradual lightening off and some lifting of the mist.

We are now in what is called the warm sector. Depending on how active the depression is and time of year, we might experience pleasant enough brighter skies with occasional showers to dull, misty conditions. It’s often the sort of hill weather where you’d have a rain jacket on but sweating a bit underneath.

The cold front follows on in due course, this cool air tends to push in under the warm, muggy air, forcing it to rise quickly and thus causing a short belt of much heavier rain that has you looking for a bit of shelter and/or overtrousers. As this cold front passes, there is often a sudden clearance as described above and a noticeable temperature drop. The wind will often veer towards the NW and the cooler air following will have regular showers in between sunny spells.

Rinse & repeat for the next cyclone or depression heading our way. As regards planning your day, the warm & cold sectors will generally be a bit drier than the passage of the fronts. If there is a front approaching as you plan to start, a cold front will be preferable as at least you know it’ll likely clear off to a better day. So look at the weather maps for these patterns, listen to/ read the general forecast for a steer and then assess how it’ll affect where you plan to be that day.

Unfortunately Met Éireann online weather maps don’t depict fronts but you can find them marked clearly as in sample attached at www.metoffice.gov.uk/weather/maps-and-charts/surface-pressure/