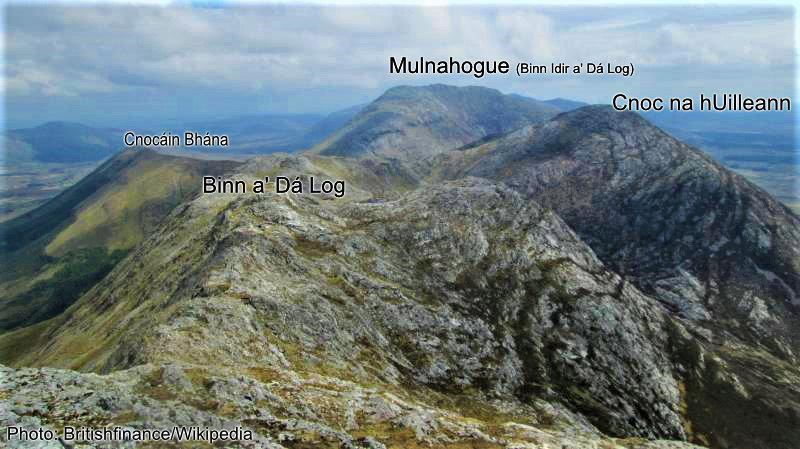 Thanks to everyone who has purchased our newly released Connemara Mountains map. It’s been well received to date and please continue to spread the word. https://eastwestmapping.ie/product/connemara-mountains/

I’ll deal with placename sources more generally at a future date but I do want write more specifically about a hill I’ve labelled as Mulnahogue in the Maumturk Mountains. The astute will know that this hill at 702 metres height is labelled Binn Idir an Dá Log on maps associated with the late Tim Robinson. By & large I have been guided by most of Tim’s names in the region, however I had some doubts re this name and it’s apparent from Tim’s own records that he saw problems as well.

The name is quite specific: Binn Idir a’ Dá Log means the peak or mountain between the two hollows. A log or hollow in these hills is something reasonably deep and substantial and the first thing I noticed when working the contours is that whilst there’s a deep hollow to the east, there’s only a concave slope to the west – so there are no two logs or hollows at this spot height 702m.

On investigating, the apparent reason that Tim placed the name here was that he was told that Binn Idir a’ Dá Log was the name of the highest point in these hills. Now that’s a tricky matter to interpret: taken literally, this spot height 702m is the highest point in the Maumturk range. But of course these hills are made up of a series of hills of roughly similar height. If the informant was talking about say the Reek (Croagh Patrick) there’d be no doubt as to what they referred to but hereabouts you’d want to know who the informant was, where they lived and grazed and how knowledgeable would they be of all the various heights. They could simply have been referring to what they considered to be the highest point above their valley. Unfortunately Tim doesn’t advise who the informant was and was uncontactable for the past several months to clarify.

Furthermore Tim also spotted that various editions of the OS Six Inch maps show a similar name some 2 kilometres to the NW on the far side of Cnoc na hUilleann. This is variously written as Benadolug or Bin eith dho lug with Log Bán lying to it’s west. This appears to be spt ht 541m with two hollows framing each side of Mámín, the little gap beside it. Given the problems of topography described above and the similarity of names, I’m more inclined to think that it applies to the OS location, although how you could say it’s the highest point would imply someone was living right under it and disregarding the higher ground behind. Alternatively Binn Idir a’ Dá Log applies to both hills but not spt ht 702m directly but rather to this whole sweep of mountain stretching in an arc eastwards to spt hts 689m and 659m which could be said to be between two hollows.

The name Mulnahogue that I have applied to spt ht 702 comes from the survey records of the Ordnance Survey. It was used as a triangulation point in the 1830s and variously named as Derryvoreeadhta, Derryridda, or Mulnahogue. The first two refer to the flanking townland of Derryvoreada/ Doire Mór Iata / Doire Bhó Riada. It seems likely that the name Mulnahogue is connected to the nearby pass called Maumahoge or Mám Ochóige. It’s not known what ‘hoge/ hogue’ or ‘Ochóige’ means but Mul would appear here to be a shortened form of Mullach – so Mulnahogue would mean the summit of ‘hogue’ where Maumahoge is the pass or gap of ‘hoge’. The only further complication is that survey parties also used the same name for Illian West or Cnoc na hUileann on the far side of Mám Ochóige.

Ideally I would have sought out possible local sources to clarify above but this was hardly practical in the gathering Covid19 restrictions and the inadvisability of visiting people. I would certainly welcome any direct local advice from people who are ‘seed and breed’ of those parts. 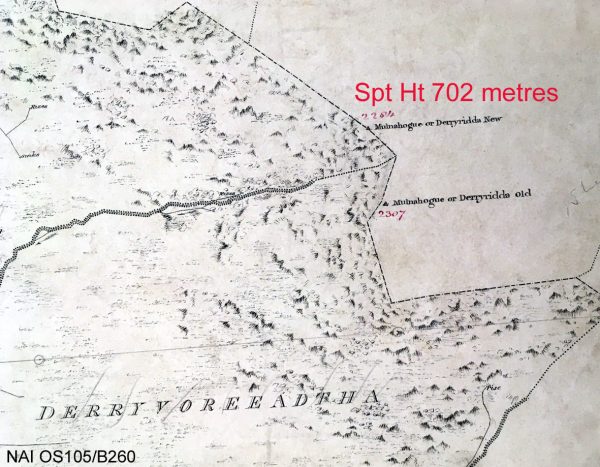