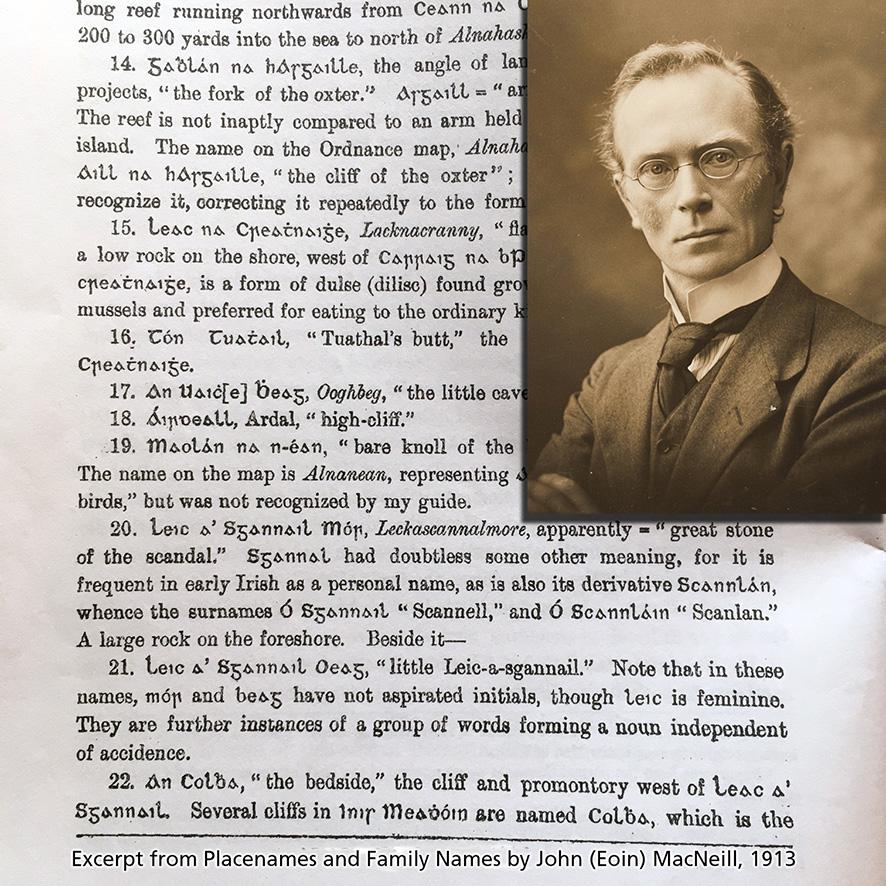 The centenary of the Treaty that led to the foundation of the Irish Free State is in the news currently. This treaty agreed in London was subsequently debated and voted upon by Dáil Éireann. What appeared to be broad support across society at large, became the subject of acrimony among the elected TDs and subsequently led to a split and civil war. Of interest here is Eoin MacNeill who was the first Ceann Comhairle or chairman of this Dáil debate.

Eoin MacNeill (1867-1945) was born in Antrim. He was a founder member of the Gaelic League with Douglas Hyde and subsequently was a leader of the Irish Volunteers. He didn’t agree with armed rebellion, viewing the Volunteers as more of a defensive force and ordered them not to participate in the 1916 rising. Nonetheless he was imprisoned after the rising, on release he was elected in the 1918 general election. Clearly he was viewed as a very capable man as apart from chairing the above treaty debate, he went onto to become Minister for Education in the new Free State government, having being Minister for Finance in the first Dáil.

However it’s as John MacNeill that we see his work in the first Clare Island Survey, which was organised by Robert Lloyd Praeger. For this multi-disciplinary survey, Praeger enlisted the help of many academics who visited Clare Island around 1909-11 and who subsequently published papers on many topics. John/Eoin MacNeill with his expertise in Irish took the boat to Clare Island in this period and his paper ‘Placenames and Family Names’ was published in 1913. He undoubtedly talked to many islanders but the principal source he quotes is one Padraic Mhac Thuathail who would have been around 70 at the time.

MacNeill relates that he made a boat journey around the island starting from The Quay and proceeding anti clockwise. He thus writes out a list of the placenames given to him of the features along the coast. He describes these in text rather than locating on a map but does refer to published maps which helps to locate the names. Along with these names and inland placenames, he described approx. 327 placenames on Clare Island, giving probable Irish forms with the help of Padraic presumably. This work whilst brief and partial, remains useful to this day and mostly these names were still recognised when I conducted fieldwork in 2016.