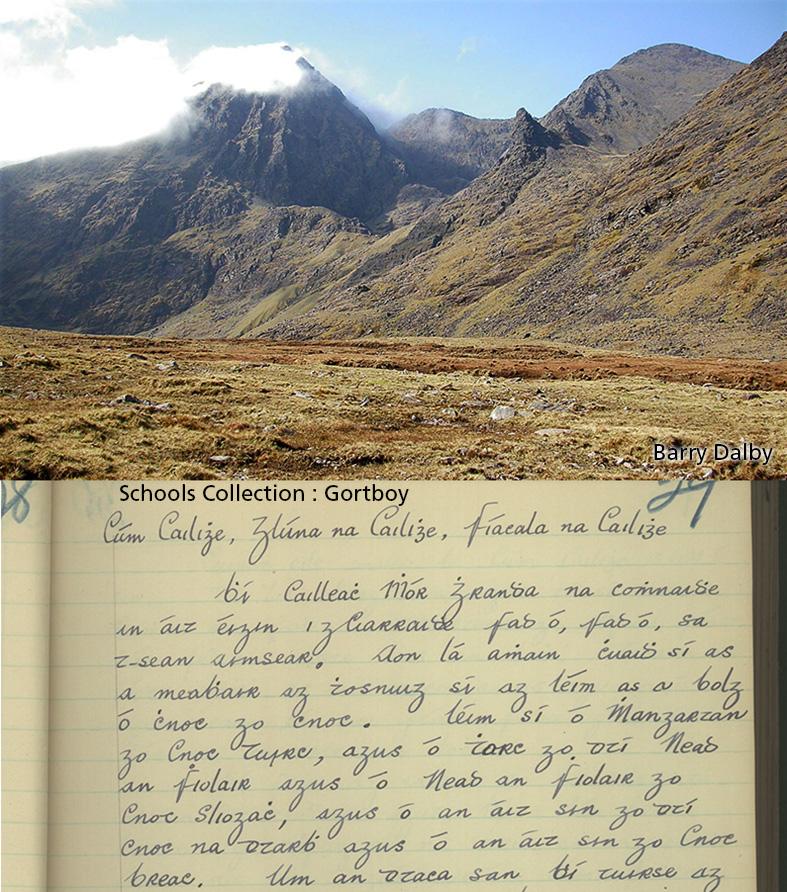 Anyone who has climbed Carrauntoohil will be familiar with Com Chaillí, Coomcallee or the Hags Glen. And the two sets of Hags Teeth, Fiacla Chaillí. There are various stories about this Cailleach or Hag, the one in the Schools Collection for nearby Gortboy school is of interest as it lists a number of hill tops.

The story is written as Gaeilge and goes along the lines that one day the Cailleach Mhór (Great Hag) goes a bit mad and starts jumping from hill to hill. She starts on Mangerton and it goes: Mangartan go Cnoc Tuirc, agus ó Thorc go dtí Nead an Fhiolair agus ó Nead an Fhiolair go Cnoc Sliogach agus ó an áit sin go dtí Cnoc na dTarbh agus ó an áit sin go Cnoc Breac. However she was then tiring, so when attempting the last jump from Cnoc Breac go Carrán Tuathaill, she fell short and gouging her way down the hillside creating the Hags Teeth, Fiacla Chaillí and marks of her knees, Glúine Chaillí in the rocks. Thereafter she inhabits the glen and periodically brings storms and misfortune upon the residents.

Most of the hills above mentioned can be clearly identified, they are heights of some prominence or notoriety. So starting at Mangerton she leps to Torc Mountain to Eagles Nest to Cnoc Sliogach (Purple Mountain as per last post) to Cnoc na dTarbh to Cnoc Breac to Carrauntoohil. The one query is where is the penultimate Cnoc Breac? It could be Cnoc a’ Bhráca but this hill is very close to Cnoc na dTarbh and doesn’t really fit with the pattern. Of course Cnoc a’ Bhráca is a good step from Carrauntoohil which might also explain why she fell short of her target. My instinct though is that Cnoc Breac (speckled or patchy hill) is somewhat further on, more midway between Cnoc na dTarbh and Carrauntoohil. It could be one of several but the most obvious is the highest peak, that hillwalkers call Knocknapeasta?